Growing up, as a kid on a farm in rural Ohio, I naturally had a bike. I remember my first bike, it was pink and white with a white basket on the front (you're average little girls bike back in the late 80s/early 90s). Santa (spoiler alert: my mom and dad) gave it to me for Christmas one year and I think it was probably the most excited I've ever been about a Christmas present. It, of course, had training wheels since I was only five years old, but I don't remember those staying on for very long. What can I say, I was a quick study. But, by no means, was I a bicycle prodigy!

Later, when I was in my teens my parents got me another bike, this time for my birthday, I think (my brain is fuzzy). This one was my favorite...it was a beautiful purple mountain bike. I'd give anything to have that bike again, especially since nowadays I'm sporting a hideous yellow and white thing that my dad so lovingly chose for me (bless his heart) for yet another Christmas present a few years ago (are you noticing a pattern?). Since I received my latest bike it has seen very little use. I remember my old roommate and I went for a half-hour bike ride some 3 years ago...and that was it! Until now!

This past weekend my big sis (who's always been really into riding) and I decided to take a little stroll on the Loveland bike trail. It was a blast! I forgot how much I enjoyed riding and being outside. Antoine and I have been pretty dormant lately, what with the two jobs each business and the recovering from winter, so it was nice to get out! After my sister and I went riding I started to think that this might be a great summer activity for Antoine and I...to get us outside and to start getting healthy. Only problem...Antoine didn't have a bike! 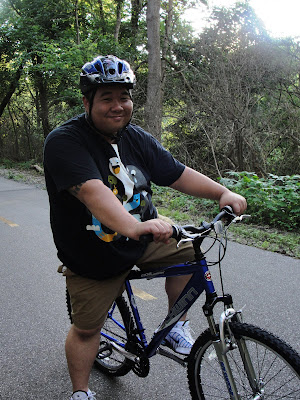 I decided, that if he was keen on the idea, that I'd get him a bike for his birthday, which is at the end of the month. Behold...Antoine and his early birthday (and part of Christmas present)! A shiny bright blue Schwinn mountain bike! I think he likes it!

Last night we went on our first ride together and we had so much fun! We decided to go back to the Loveland bike trail, because I had really liked it the first time and it's fairly close to our house (about a 15 minute drive). The trail's not too crowded, pretty flat and, my favorite part, mostly shaded (this prevents my pasty white skin from melting in the sun)... 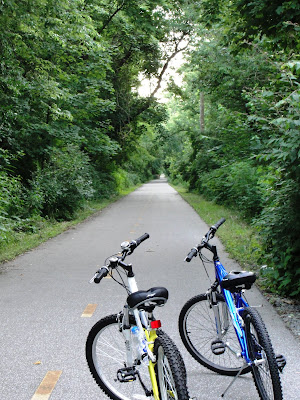 We ended up riding about 8 miles; just a leisurely, fun evening ride...it was great! There were no falls or flat tires, although I did manage to somehow cut my finger (but it wasn't too bad). 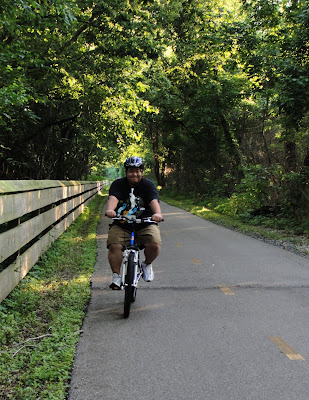 Antoine probably hasn't been on a bike for about a decade and a half, but he did really well! I, on the other hand, will probably always be a little wobbly on a bike...oh well...as long as I have fun and don't fall!

The trail is really pretty and very wooded, which I love. Part of it runs in between the Little Miami river and U.S. Route 50, but it's so wooded that you really can't tell. There's a variety of stops, places to have a little picnic, use the restrooms and park your car. So far my favorite place to rest is a little clearing with a park bench and a tiny field of wildflowers! 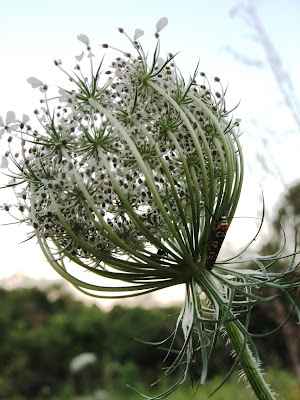 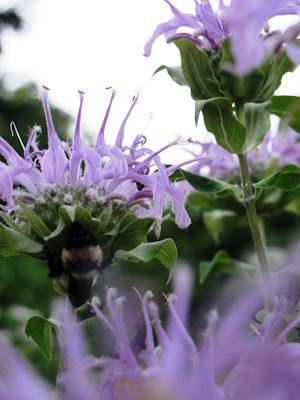 We will definitely be making another trip to the Loveland bike trail very soon! Possibly for July 4th! And perhaps this time we'll pack a picnic and make it into a whole little excursion!? Also, we plan to try other trail and parks throughout the summer! I can't wait!
Posted by dissolvedintosomething at 8:02 AM