I'm going to try out something new on here...a restaurant review! I know, I know...you're thinking, "this isn't a food blog you silly goose" (well, maybe you didn't include the "silly goose" part)!! Yes, I know this isn't a food blog, but I love reading food blogs and I love food. And this is my blog and I can do whatever I want...so there! [Insert raspberry noises and hands mimicking Bullwinkle antlers here.]

For those of you who don't know, Antoine is a little bit of deal hunter! Antoine LOVES a good deal! I'm a bargain shopper as much as the next person, but the difference between Antoine and I is that he'll search out bargains. He checks sites like slickdeals and Half Price Cincy multiple times a day searching for a great deal! When it comes to buying regular household items, clothes or Christmas/birthday presents he'll hunt for a deal! He'll go from store to store searching for the best price! It drives me nuts, but I love that about him! Anyway, recently he found this sweet deal on wcpo.com for a $10 gift certificate to Soup Du Jour in West Chester for $5!

I had heard about Soup Du Jour a couple months ago, however, at this time I can't for the life of me remember where I read about it! Oh well. I had been eager to try a place that specialized in soup, since Cincinnati seems to be lacking in the soup department, or at least in places that focus primarily on soup instead of treating it as an afterthought. When you visit their website you see that Soup Du Jour's soups are ever-changing. The list, at least during the warmer summer months, consists of both hot soups and cold soups, such as a strawberry soup and a gazpacho. A few of their soups are even gluten-free, vegetarian, and vegan! They also have a selection of sandwiches and salad, which can easily be paired with soup in one of their five combo meals.

We decided to buy up two $10 gift certificates since they were such a great deal at 50% off! And then that night we made our way up to West Chester. Now, West Chester isn't a normal hangout for us, in fact, we've only ever gone there to go to Ikea, but we were itching for some tasty soup and we had a gift certificate burning a hole in our pockets! When we arrived for dinner there were already a couple of people in the cafe, which we took as a good sign! The restaurant is set up similar to Panera, where you go up to a counter and place your order. However, at Soup Du Jour they bring your meal out to your table.

Antoine and I both decided to get a #4 combo, aka a Pick Two. You can pick any 8oz bowl of soup and either a half sandwich or a half salad, however to get the crab bisque it is an additional $1 and it's a $.50 extra for a house, cobb or chef salad. All the combos come with a 20oz fountain drink (and they have Gold Peak iced tea, which made me very happy!) and a piece of either cornbread or beer bread. 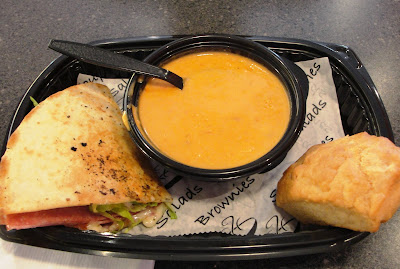 Antoine went for the crab bisque and a half Italian panini (sans tomato and pepperocini) with beer bread. I didn't care for the crab bisque, it had a strange aftertaste to me. Antoine said it was okay, but I could tell he wasn't crazy about it! He noted that there really weren't any chunks of crab in the soup and that's usually the mark of a really good bisque (at least to him)! I was a little worried about the "panini" since it came on a flour tortilla and looked more like an Italian quesadilla! But I was surprised, it was actually quite tasty! Antoine really enjoyed it! The beer bread was okay, but a little too rubbery. 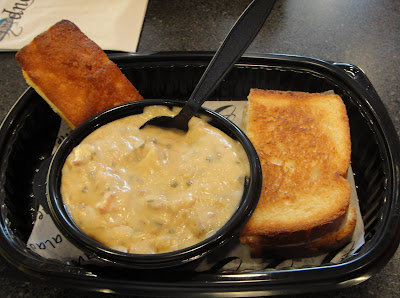 I opted for the loaded baked potato soup and half a grilled cheese sandwich with cornbread. I must say I was very disappointed with my meal...well, mainly the soup! It was WAY too salty (and super thick)! And I'm a person who loves salt, but I could only manage about 5 or 6 spoonfuls and then I forfeited the rest to Antoine. The grilled cheese was good, but nothing out of the ordinary (don't try comparing it to Melt's three cheese melt...it will lose miserably!) The cornbread was very tasty and made Antoine wish he would have gotten that instead of the beer bread!

Overall, our experience at Soup Du Jour kind of bummed me out a little! I was so looking forward to some really delicious soup...something similar to what I imagined the Soup Nazi's soup to be like from Seinfeld, but I was let down. Well, at least we only spent $10 for dinner, thanks to wcpo.com! However, we still have one more gift certificate left to use and I can't say that I'm very eager to go back! Although, I'm trying to remain hopeful and assume that maybe they were just having an off night!? We'll see!
Posted by dissolvedintosomething at 8:49 AM