A Clusterf#@k of a July 4th

**Please excuse the lateness of my July 4th post...I've been busy working, working some more, forgetting my camera at home (3 days in a row) and working!

I've never been much of an Independence day person. Now, don't get me wrong...I like my independence as much as the next person and I'm all about celebrating it (and getting a paid day off from work), but growing up my family never got too excited about July 4th. Sure, maybe we'd go to a relative's house for a cookout or something, but there were never any annual predetermined plans. I've really never been to a July 4th parade (which I'm totally okay with considering my aversion to crowds). And while I enjoy watching fireworks, we were not one of those families that went out, bought mass amounts of fireworks, and risked our life, limbs, and a possible fire just for some pretty lights. Antoine, on the other hand, grew up in that kind of family. When he was younger they would get fireworks and he and his brother would set them off. It's a normal American family tradition...that scares the everlovin' crap out of me!!

So, it's not surprising that every year Antoine suggests that we go buy some fireworks to shoot off and I immediately start shaking my head. Then, after he continues to talk about how it would be "so much fun" to get fireworks, I begin my rant of how fireworks are not safe and I happen to like his hands and face and I don't want them to be blown off! For your information, this hatred of fireworks most likely stems from my overprotective and fearful mother who probably said the exact same words to my father when I was little and he suggested getting fireworks! Oh god...I've become my mother!!! AHHHHH! [please remain patient while the author has a minor panic attack] ...........................Okay...I...think....I'm....ok...AHHHHHHHH!

So, I hate fireworks...well, at least the ones that you buy in the store that cause people to burn their limbs/face off every 4th of July. The other kind, the semi-safe kind that go off at baseball games, the kind that professionals do...I'm ok with those! Hell, they're pretty. And sure, they're still dangerous, but not to me or anyone I love!!

I know, I'm such the party pooper! But I'm not completely devoid of fun...I let Antoine get sparklers!! So that's what our 4th consisted of...a vagrant-like day roaming around Cincinnati trying to decide what to do, Antoine constantly suggesting getting firework, me continuously refuting that idea and in the end, parking our car in a local Norwood business park to watch the neighborhood fireworks and then going back home to act like 7 year olds with our sparklers! Good times. 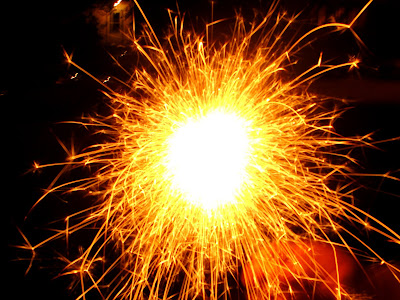 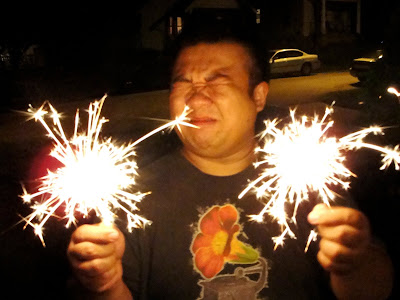 I like how it looks like Antoine is getting punched in the face by a sparkler, when really he's just making a weird face for no apparent reason! 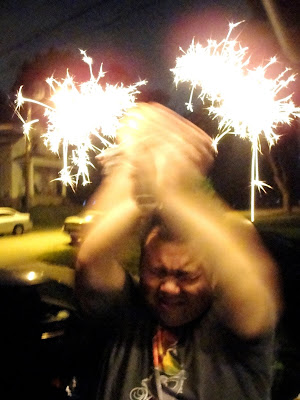 There was some mention of Top Gun and then he started doing this! He's special! 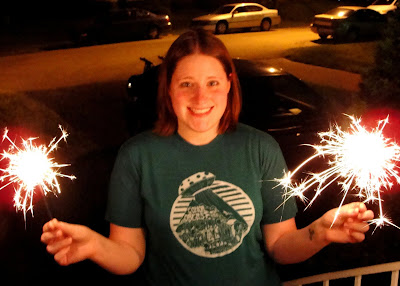 Notice how the sparklers are at a safe distance from my hair and face! 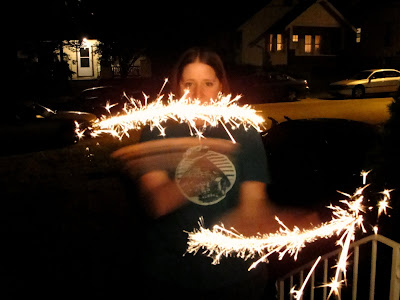 This is about as wild and crazy as I get on July 4th! Baby steps people...baby steps!!
Posted by dissolvedintosomething at 8:29 AM